Somewhere, sometime long ago lived an old farmer and his wife. Everyday when the old farmer went out to work in the fields, an old tanuki, a trickster raccoon dog and troublemaking shapeshifter, came out of the mountains behind the fields. From behind the old farmer, he threw rocks and clumps of mud to ruin the picturesque field created with great care by the old farmer. Although the old farmer chased after the tanuki, he bolted off and escaped. Sometimes the tanuki stopped his mischief for a short time, but returned again to pick up where he left off. The old farmer was at his wit's end and set out a trap. Then one day, the tanuki got caught in the trap.

The old farmer danced with joy.

"Ah. This feels great. I finally got you," he said while tying up the tanuki's four legs and carried him home. The old farmer hung the tanuki from a ceiling beam. Before he went back to the field, he told the old woman, "Watch him. Make sure he doesn't get away and cook me some tanuki stew for supper tonight."

Below the tied up and hanging down tanuki, the old woman took out the mortar and pestle to grind wheat. After a time, the old woman wiped away her sweat and said, "Oh, I'm so tired."

At that moment, the tanuki, who had been quietly dangling above her, said, "Excuse me, Granny. If you're tired, I could help. But for me to help you, you have to remove this rope."

Why oh why would you help me? If I take off the rope, are you going to help me or dash away?"

"No, how could I run away when I'm all tied up like this? Well, as a test, let me down and watch."

Perhaps because she admired his persistence in asking, the old woman was careless and believed the tanuki's words. She loosened the rope and let him down.

The tanuki said, "At last," and rubbed his arms and legs that had been bound. As he said, "Well, let me help you," and picked up the pestle and pretended to pound the wheat, but suddenly swung the pestle low into the crown of the old woman's head. She gasped, her eyes rolled up, and she toppled over.

The tanuki quickly cooked the old woman to make granny stew instead of tanuki stew. He shapeshifted into the old woman, put on a calm face, and sat in front of the hearth to wait for the old farmer to return.

Smiling to himself, he swiftly returned home. There, tanuki granny was waiting.

"Oh good you're home. I cooked up tanuki stew for you," she said.

"Oh. Really? That sounds good," he said and sat right down in front of his bowl, and granny tanuki served him.

"This is tasty. Very tasty," he said, smacked his lips, and gobbled down a second helping of the granny stew. Seeing this, granny tanuki revealed her true form.

"Hey Gramps, you ate the old hag. Look, her bones are under the sink."

As the tanuki spoke, his large tail popped out and he escaped through the back door. The old farmer held the bones of his wife that were under the sink and cried bitter tears.

"Hey old fellow, what's wrong?" said a white rabbit, who lived in the mountains behind the old farmer's house, as he came in.

"Aaah, is that you, Mr. Rabbit? Come here. Please listen to me. A horrible thing has happened," said the old farmer and told him what happened. The rabbit felt sad with him.

"Well, that was a shock. Don't worry I will avenge you," said the rabbit with delight.

Tears of joy rolled down the old farmer's face, and he said, "Oh, please, I beg you. This is just awful. I can't stand it."

"It will be all right. First thing tomorrow, I will invite the tanuki over and bring misfortune on him. Just wait a little longer," said the rabbit and went home. 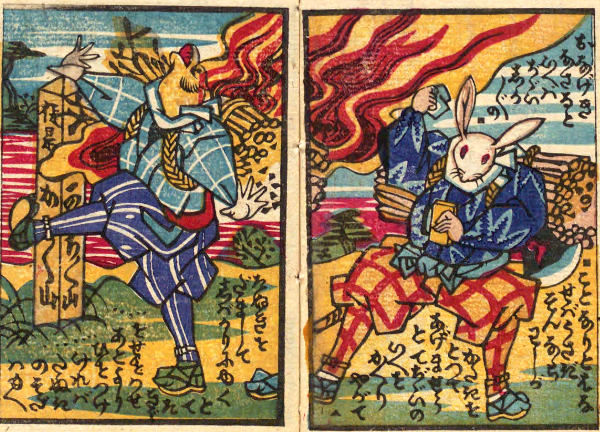 After the tanuki ran out of the old farmer's house, he was so scared he climbed into a hole and did not go out anywhere.

Then one day, the rabbit carried a sickle on his waist and went on purpose to the area of the tanuki's hideout. He took out the sickle and eagerly cut the grass. While cutting the grass, he took out and munched on dried chestnuts in the bag he brought with him. The tanuki heard the sounds and crept out of the hole.

"Mr. Rabbit, Mr. Rabbit. What is that delicious food you are eating?"

"If I give you some, will you carry half of this grass to that mountain over there?"

The tanuki craved the chestnuts, so he gave in, loaded the grass on his back, and set off ahead of the rabbit. When they reached the distant mountain, the tanuki turned around and said, "Mr. Rabbit, Mr. Rabbit. Will you give me those chestnuts now?"

"Oh, I'll give them to you if you go one more mountain. See, over there."

With no choice, once again, the tanuki quickly walked off first. When he reached the next mountain, the tanuki turned around to say, "Mr. Rabbit, Mr. Rabbit. Will you give me those chestnuts now?"

"Oh, I'll give them to you, but go to that other mountain further away. Then I'll definitely give you the chestnuts."

With no choice, again, the tanuki set off first and thought he'd go as fast as he could to the mountain. Without looking back, he walked as hard as he could. The rabbit used this opportunity to take out a flint to start a crackling fire. The tanuki thought something was strange and said, "Mr. Rabbit, Mr. Rabbit. What is that crackling sound?"

"You see, this mountain is Crackling Mountain."

"Oh, so that's it?" said the tanuki and started walking again. In that time, the fire lit by the rabbit moved to the grass on the tanuki's back and burst into flames. Again, the tanuki thought something was strange.

"Mr. Rabbit, Mr. Rabbit. Why did it burst into flames?"

"Well, that mountain further away is Flaming Mountain."

While the tanuki said, "Oh, really?" the fire rapidly spread over his back.

When he dashed away, the mountain winds blasted him from behind and the fire swelled. The tanuki squealed in pain. He thrashed about and finally threw off the burning grass and dove into a hole.

The rabbit yelled, "Oh my, this is terrible. Fire! Fire!" and went home.

The following day, the rabbit put pepper into miso soup to make an ointment. He took the ointment and went to visit the tanuki. The tanuki had a large wound on his back. As he grunted and groaned he rolled into a dark hole.

"Yeah, it was really a terrible day. What can heal this big burn?"

"Oh yes, how unfortunate. I've concocted and brought with me a most effective treatment for burns."

"Really? Thanks so much. Hurry, put some on me," said the blistered tanuki. Red skin had appeared on his sore back. The rabbit plastered the peppery miso ointment all over his back. This hurt the tanuki like his back had been set on fire.

While screaming, the tanuki tumbled into his hole. The rabbit smiled as he watched.

"What's wrong Mr. Tanuki? It does tingle a bit at first. You'll heal right away, so bear it just a little longer," he said and went home. 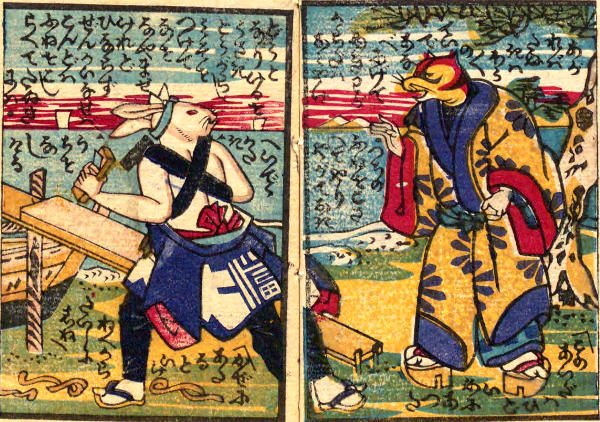 Four or five days passed, then one day while the rabbit was talking to himself, "I wonder how that tanuki is doing? Next time, I'll take him out to sea and make him suffer." At that moment, the tanuki unexpectedly appeared to pay a visit.

"Oh, hello there, Mr. Tanuki, has your burn healed?"

"In that case, no more mountains, shall we go to the sea? We can fish in the sea."

"Ah, the weather is great."

They remarked while they gazed in amazement at the sea. The rabbit said, "There aren't any fish around here. Let's go further out. Let's race and see who's faster."

The tanuki said, "Okay. That should be fun."

They shouted, "One! Two! Three! Go!" and started rowing.

The rabbit slapped the sides of his boat and said, "A wooden boat is light and fast."

The tanuki wasn't going to lose and pounded on the sides of his boat and said, "Ah, the dirt boat is heavy and strong."

Water slowly invaded the dirt boat, and it started to break apart.

"Oh no. My boat is falling apart," said a surprised tanuki and started to get upset.

The rabbit enjoyed watching the tanuki and said, "It serves you right. You tricked the old woman and killed her, then made the old farmer eat granny stew."

The tanuki said he didn't do that and begged the rabbit to save him. As he did, his boat steadily crumbled and he was soon floundering and gasping for air. Finally, the tanuki disappeared into the sea. 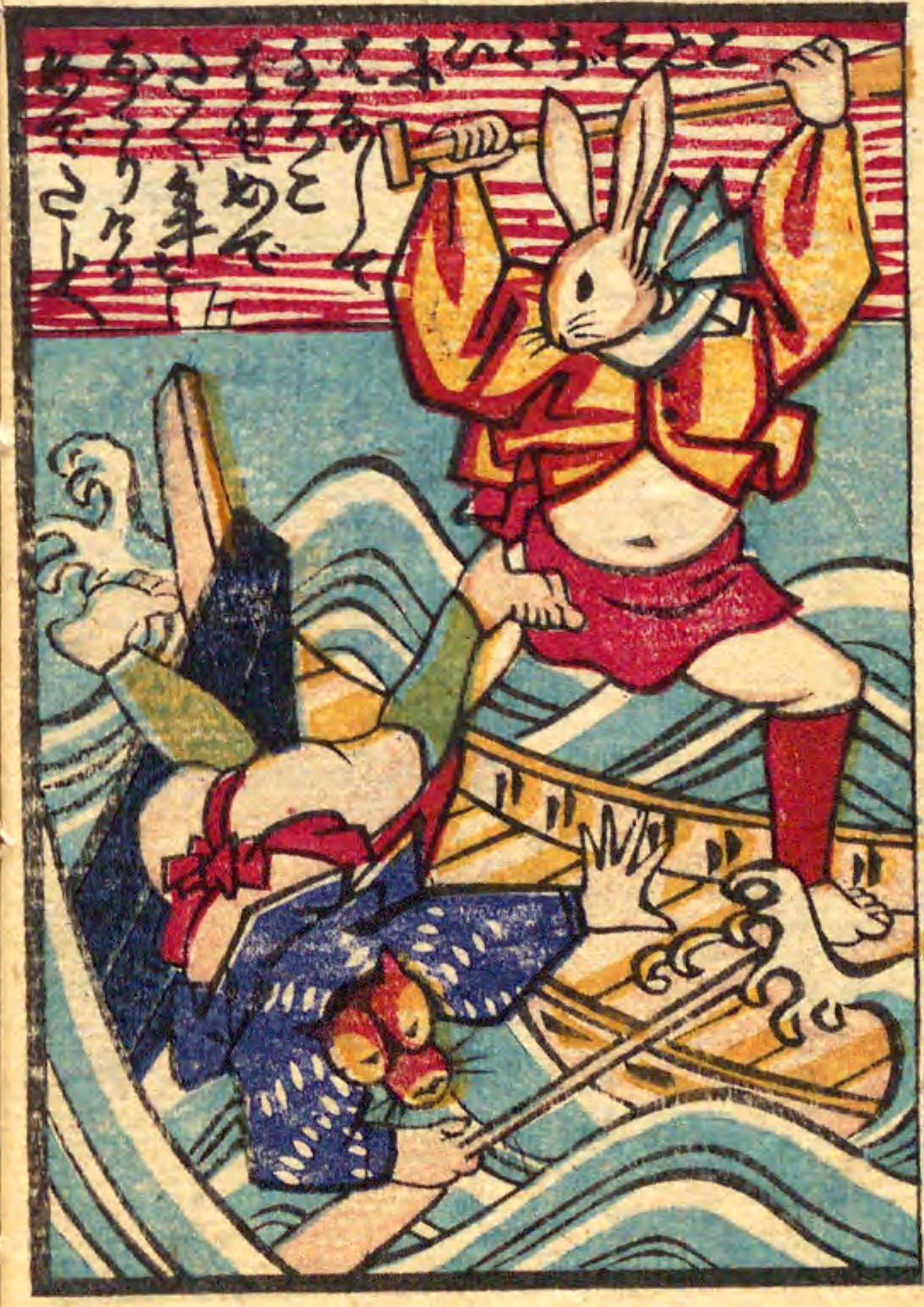 Now that you know the story, here are two picture books from the Meiji era.

Read Hanasaka Jijii - The Old Man Who Made the Flowers Bloom.